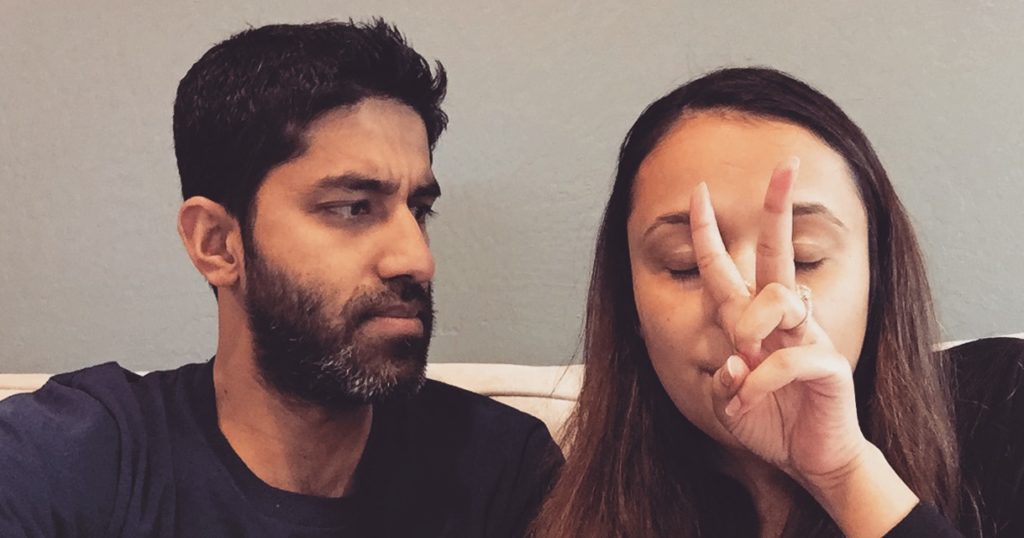 97% of the time my wife is yelling at me about something I did or did not do (her opinion, not mine). But 3% of the time, something strange happens in the universe, and our auras and energies sync and become one. It happened last week. Here are 5 examples:

La Croix flavors – we bought a pack of La Croix sparkling water over the holidays and a few of the gross leftover flavors found a home in the back of the fridge. My wife, who has yet to fully experienced the magic of La Croix, reached for a Cran-Raspberry and took a sip. She instantly made an “eww” face. “It tastes like cough medicine, right?” I inquired. “That’s exactly what I was just going to say!” she reacted. I was like, “I know, gurl” and raised my hand up for a high-five. She did not high-five me back.

California Love – this gem of a song snuck onto the Sonos speaker somehow through one of those “Top Hits” Spotify playlists. My wife and I locked eyes and proceeded to recite the entire song outloud verbatim (she was Dre, I was Tupac). The kids had no idea what was happening and why their parents were suddenly fist pumping and yelling weird words. The song ended, we were both out of breath, but we knew we crushed it. This is probably also why the 3-year old repeated the F-word recently (which is an entirely different story and issue).

John Wick 2 – I still have the Netflix DVD account because not everything is available on streaming (#duh #lifehack). I glanced at the queue on my phone and told her that John Wick 2 was on its way. Without uttering a word, we fist-bumped. Truth is, we both love Keanu Reeves, Will Smith, and Nicolas Cage and will watch anything they’re in. Also, another truth: we couldn’t even finish La La Land (don’t hate us, we were really tired that day!). John Wick 2 is just a really good dumb movie where you can zone out on the couch from a hard day of parenting until someone falls asleep the first 15 minutes of the film. Who’s with us on this?

Price Tag – We bought a gift at a local bookstore for my little niece who recently turned 10. They wrapped it for us, and while we were driving, I suddenly asked, “Hey did they take off the—.” Before I could finish my sentence, she said “Yes, I watched them do it.” She knew exactly what I was talking about without any context. Then, she said, “Hey, did you fix the—.” Before she could finish her sentence, I replied “It’s on my to-do list don’t worry about it!” This is our life now. We both know what the other person is yelling about before we yell it.

Nob Hill – A Nob Hill Grocery Store opened up right next to us and they sent us a physical “grand opening” postcard in the mail. I turned to my wife and said “Hey, do you want to go on a date?” She looked puzzled and asked “Where?” I walked over and seductively whispered, “Do you want to go to the new Nob Hill and judge their produce prices?” She gasped with excitement and shouted, “Let’s go now!” Long story short, we held hands and threw major snub walking down every aisle. It’s called romance, ever heard of it?